I don’t appear to have the completed image of this piece as the attached hummingbirds are not in this shot.

This piece was originally intended to be placed at pedestrian level but somehow ended way-way up in the air, where it looks very lonely on a very large building.

It was a case of too many cooks, though the client, Sue Scott, was outstanding and I loved working with her. 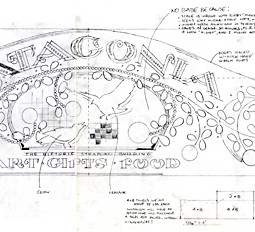 A scale pencil drawing for the mural
An architect’s scale ruler is essential for large projects. That and a #2 pencil are all that were required for this image. No I do not use a French curve, ever.

I made a number of copies of the drawing and painted them with Q-tips and lettering enamel to determine coloration. 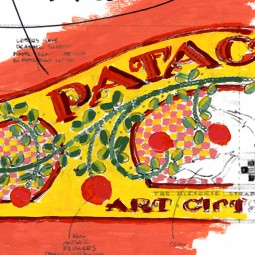 We finally went with this coloration and I still can’t decide if the yellow would have been better, though at the time I thought it might have looked like a taco sauce label.

At this point the six MDO panels have been laid out, cut, primed and coated with exterior enamel. Then the panels are tightly butted for accurate layout.
The tight pencil comp made with an architect’s scale is invaluable in the layout phase as all the decisions have been made and one only has to use the scale to determine all measures.
Using this tool enabled me to paint many a billboard on-site as a youngster, laying out and painting as I went across as much as 48’ with no real error. In later years I have done the same with up to 100’ banners, scrolling, laying out and painting as I go.

Painting in the studio, with careful attention paid to the seams. 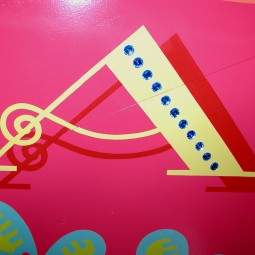 The painted letter is about 10” tall. Seams must be butted at layout and painted carefully. The plastic gems are inlaid into tight perfect Forstner-bit cut holes.

Hawk in progress (from the photo reference taped to the board), drawn with a water-soluble marker.
Though later I went with hummingbirds, go figure. 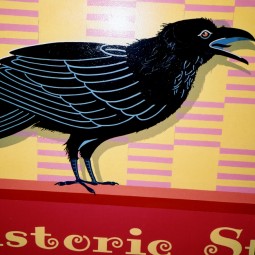 I painted a crow and then mixed another color to paint the shadow. You can’t really make a glaze out of lettering enamel as it will not survive the elements. 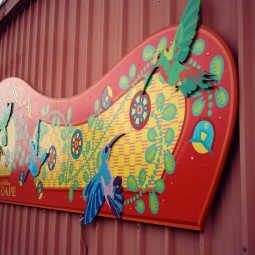 My friend John Culler and I installed the panels over an underlayer of 2 x 4 attached to the building, and then I attached the separately cut hand painted hummingbirds.